TERMINUS INTERVIEW -
'In Darkness There Is No Choice' Fanzine 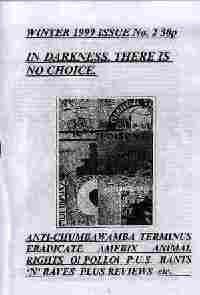 TERMINUS INTERVIEW FOR “IN DARKNESS THERE IS NO CHOICE” ‘ZINE.

WHEN DID TERMINUS FORM? Some time during the murky depths of 1983 with me on guitar and vocals, Chris Lazenby on bass and his brother Pete on drums.

THERE HAVE BEEN NUMEROUS LINE UP CHANGES IN THE YEARS THAT TERMINUS HAVE BEEN GOING, IS IT HARD TO FIND NEW MEMBERS AND WHAT KEEPS YOU AT IT? Yeah, we have been through a fair few members in our time, and it is pretty hard finding people who are into the music enough, not to mention competent. If Terminus had been based in a city then it would have been a different story. The sorry fact is that most members of Terminus
have been drunken idle bastards, which hasn’t helped, and I include myself at the top of that long list! What keeps me at it? Sheer bloody minded stubbornness. Not forgetting an unhealthy dose of masochism and a liking for banging your head against a brick wall.

ON “PROPAGANDA WAR” YOU TALK  ABOUT REVOLUTION ONLY HAPPENING IF WE CAN REACH THE MASSES WITH OUR IDEAS. DO YOU STILL BELIEVE THAT TO BE SO? Yes. Obviously we are not going to be able to get everyone believing in anarchism. But what we need to do is to help turn peoples opinion against the authorities while getting over at the same time the idea that this iniquitous system can actually be replaced by one worth living in. I don’t think that most people really trust the politicians, they just can’t see any workable alternative, and when you see the infantile prattling of your average (and they’re all pretty average) Lefty you can see why!

YOUR FIRST TWO 7”ERS WERE RELEASED BY YOURSELF, SO WHAT MADE YOU RELEASE THE LP’S ETC, ON WORDS OF WARNING RECORDS? Simply because he offered to release them on his label! We’d have released more stuff if we’d had the opportunity. It still pisses me off that the line-up that recorded the ‘Back Among the Blind’ album never got the chance to do a follow up LP because the songs we had were coming along well. It would have
been a far better album.

SOME PEOPLE SEEMED TO THINK W.O.W. LOST THE PLOT AND WEREN’T AS RELIABLE AS THEY SHOULD HAVE BEEN. DID YOU HAVE ANY DODGY DEALINGS WITH KARL? Yes, I’ve been asked this question before. To be honest, I would like to get hold of Karl, not least because I’d like the master tapes back for the two albums. I want to put the first one onto DAT for a start and re eq it, more for myself than anything else. I don’t really want to slag people off as there is no point to it, but I’m going to have to catch up with him one day soon as I really do want my tapes back.

YOU SEEM TO BE ALMOST A THROW BACK TO THE GOOD OLD DAYS OF MELODIC 70’s PUNK, AND AS A LOT OF TODAYS BANDS SEEM TO BE INTENT ON REMAKING THE FIRST DISCHARGE 7”, DO YOU FEEL THESE BANDS HAVE MUSICALLY LOST THE PUNK PLOT?  Oh dear, the first Discharge EP, eh? Yeah, got ‘em all... never listen to any of them, and probably never did! Yeah, I’m a throw back all right, pre Neanderthal man. I think ‘punk’ is an attitude more than a musical style so I suppose people can follow whatever plot they like, but for myself, I always preferred the early punk bands. Not that I don’t listen to thrashy stuff, I just prefer thrash with tunes... and words you can hear are always a great help as well!

ANY PLANS TO RELEASE ANY MORE RECORDS/ TAPES? IS THE ACOUSTIC LP YOU RECORDED EVER GOING TO BE RELEASED? Yeah, ’d love to get the third LP recorded and another single maybe. We’ve got the songs all we need is the opportunity to get them down (and a stable line up would be a help!). So any offers would be welcome! Ha, ha. ha! Surprisingly enough (ho hum), we never got round to recording a proper acoustic album, but we
did record a dodgy acoustic tape called ‘Hands Up For an Early Grave’ which someone was going to release. Needless to say it never did get released, which was probably a small mercy in the end. There’s probably only three or four songs on that worth listening to anyway. The  acoustic LP is another of those projects that I’d like to get to do, eventually.

WOULD YOU EVER RELEASE ANY MUSIC ON CD OR DOES THAT FORMAT HAVE NO PART IN THE PUNK SCENE? Well, they obviously do have a place in the punk scene as there are enough of them about now. I’ve heard all the arguments about not doing CD’s but they still all ring a bit hollow to me. So they’re a part of the evil capitalist machine?... and when it comes down to it so are all the pressing plants and the materials that go into the making of vinyl records and tapes. However  ‘independent’ they might be they are still using capitalist industry to make their ‘products’. It comes down to where you draw the line. If your songs are trying to get a message across then not doing CD’s mean you will never reach those people who only have CD players. Perhaps to the holier than thou's among the ‘right on’ brigade they’re people already beyond saving, I don’t know. Not that I actually think most people ever listen to the words of songs anyway. It all comes down to entertainment in the end. Gigs or records. Songs won’t ever change the world, people will. I hope. So, finally, we would release stuff on a CD. Maybe a CD with all our singles on would be a good idea?
Getting back to the acoustic LP, we were supposed to be doing one for Pablo’s Resistance Productions in Switzerland. Now the reason that album was never done was that I could not
guarantee to Pablo, who was/is against CD’s, that I wouldn’t, if given the opportunity, never put the resulting album out on CD. It would have been 99% unlikely that it ever would have come out on CD, but in all honesty I couldn’t say that I wouldn’t let it, so that was that. I had no problem with that, people should stick by their beliefs... unlike a lot of the old Crass hippies from round here who used to preach their shit to me! Where are they now do I hear you ask? No? I’ll tell you anyway. Taking their kids to McDonalds... so they don’t miss out on the experience! I ask you! How can your kids be missing out by not eating dog burgers? Oh aye, nearly forgot, or working in banks. Wonderful.

ANY THOUGHTS OR COMMENTS? Not really, boring bastard that I am! Still hung over from Saturday night that’s my problem. Cheers for the interview and if anyone wants any of our
EP’s, I still have a few copies of the 2nd, 4th and 5th ones left (in true capitalist fashion!)
to flog.