Tenth Terminus gig: 20th June 1987 at Bentleys,   Scunthorpe, in the Beer Garden. With a set from Daz
Lloyd, on which the author of the following weeks Target Tracks had this to say:

"Terminus were as near they'll get to their best in their set later in the afternoon. Playing an embarrassingly audible 'Propaganda War to the exact people it was it was aimed at was a treat to watch but at the same time it was a little too close to home. "You put your message to the chosen few, But have you ever thought you're not getting through... You think you're the new elite. You're living in your own little clique." Tell it like it is, Mark.
It's good to see a local band recognise their limitations and are making a real attempt to get over them. If a band who played music aimed at the charts had the talent commitment and professionalism of a band like Terminus, they would have been out of the town years ago, making the big bucks, but I don't think there's much chance of that happening to Terminus, unfortunately."

The line up for this set was Mick Hare, Daz Lloyd, Col Spence and Mark Richardson. Daz played his solo set first and was joined for a few numbers by Pete Lazenby on drums. Some photo's of that gig below: 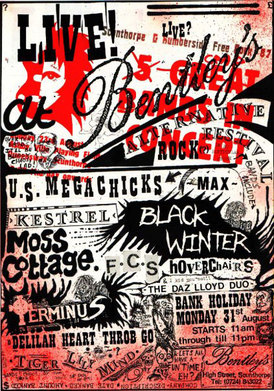 Bentleys Alternative to the Rock Festival, in the Beer Garden - 31st August 1987

This was a great day, from the early afternoon start to the late nigh finish, and as far as I could see everyone had a good time. The Scunthorpe Evening Telegraph testified later as to the good humour of the participants, and also to the amount of alcohol consumed, which was reported by the Landlord Mal Davies (not forgetting his wife Sonia) as being:

My favourite band of the day had to be Sheffield's Fuck City Shitters, as punk bands go the were best I had seen for a while. Although the US Megachicks, who played the pub on a good few occasions were always a great live band as well, albeit not exactly 'punk', more 'rock'. Terminus did our usual trick of going on early, so we could start drinking and enjoy the day! Cheers to Col Spence for the above 'Telegraph' snippet, and best of luck to Mal and Sonia, wherever they may now be.
TERMINUS: FIRST SINGLE RELEASE
In January 1987 Pete left yet again to be replaced by Mick Hare (ex Libito, Tiger Lilly Mind    and Max). Dave also drifted from the band around this time to be replaced by Daz Lloyd, ex
Declaration and part time Murderous Musician. All of which brings us to the first of our excursions into the wonderful realm of vinyl. Why these particular songs for a first single?     Because, right up until the day we entered the studio, we had no idea which ones to record, so in the end we did the ones we could play the best (or thought we could play best). Now there's organization for you! 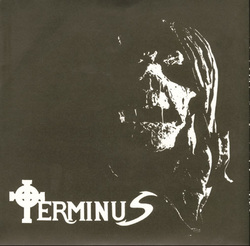 'Recorded in October 1987 at the Headrooms in Doncaster. Mixed by Rob Jeffery and Mark
Richardson because none of the others could be bothered.'
By the time this actually came back from the pressing plant it was January 1988, and the
sleeves were glued up by hand by myself and Hairy, it also came with a double sided lyric sheet insert. The 'Headrooms' was actually situated in the basement of an old sweet factory (ex Nuttall's Minto's I believe). How apt, seeing as we were all so sweet! (Gag! Retch!...  or should that be  'wretch'?) A big Hello to the Crow People who were mooching about in the studio at the time!
The song Kill Mechanism was inspired by a quote in a booklet called 'Thus Spake Zaharoff' by Donald Roger, from a US Army film:

"We think of this not as a weapon but as a kill mechanism."

The 'kill mechanism' in question being the concussion bomb which President Ford had agreed to sell to Israel but which president Carter withdrew. The bomb squirts out a film of inflammable liquid which then detonates crushing bodies and tearing them apart. Charming.

"Three powerful mid-tempo punk songs wallowing in bitterness and alienation with heavy political overtones.The lyrics are suitably grim and the music has enough minor chords to match. A strong release: the overall sound and feel kind of reminds me of NAKED RAYGUN. (DF)"

'Maximumrocknroll' April 1988.
Minor chords? There are no minor chords in any of the songs! Must be the way we play 'em!

"Jake Thackaray joins Class war? He growls uncompromising and embittered lyrics over speedy guitars owing more to good old fashioned punk rock than the currently trendy hard-core thrash, and all the better for it."

"This is the sort of stuff which I thought just didn't exist in these days of 'thrash' and 'awesome mosh power'. Fast, tuneful and energetic good old punk rock here. Lyrics  are mostly anti-authoritarian stuff though the song 'Star Born Thing' seems a bit obscure. The best record I've heard so far this year."

All three tracks were played by John Peel on his radio show, 'Kill Mechanism' about three times, or so I was told, as I didn't manage to catch any of them. 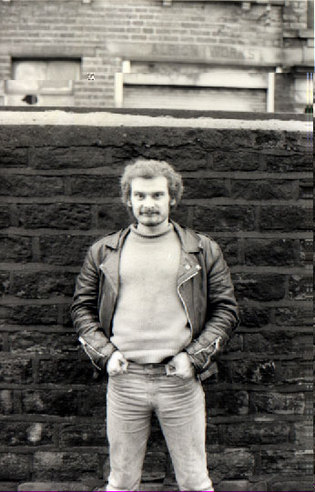 Daz left the band sometime in 1987 to be replaced by Dave Bairstow, who then left to be replaced by Daz yet again. I know, complex ain't it!
Daz leaving later in 1988 to pursue other projects was replaced by another ex-Duck in Fog member, Richard 'Rocky' Oxenforth, specifically to play some 'decent' lead guitar and the band finally made it into the studio to record their much talked about (by the band that is) second single.
Rocky had also previously played in early Scunthorpe punk band Fault 151.

Scunthorpe Rock Open 1988
On 22nd July 1988 Terminus again entered that years Rock Open, held as usual at The Baths Hall, Scunthorpe, on which event local musician/
photographer turned journalist, Nic Salmon, had this to say in one of the local free rags:

"Local hopes where dashed as Terminus failed to
impress the judging panel - yet they did manage by far and away the best audience reaction of the night. One of the town's most established bands, this popular quartet played a strong set of music which once again confirmed both their ability and commitment; it would be easy to blame a poor sound on the night - yet the fact remains that Terminus do not play the kind of music that wins this kind of contest; the lads will however, continue to score plenty of success outside of that arena."

Many years later I ended up 'Judging' a Rock Open night myself and came to see first hand how
arbitrary and unorganised the judging process was. Certainly there seemed to be no set criteria or standard by which a bands music and performance was assessed and judged (bearing in mind the many different musical styles involved). Maybe it was different in 1988, but I doubt it, as I remember someone I knew very well telling me who was going to win one year (he had been told by one of the 'judges') - and they did.

Bentleys Alternative to the Rock Festival, in the Beer Garden - 29th August 1988

Line Up (according to the poster!): Tiger Lily Mind/ The Diseased/ Nerve rack/ Incinerator/ The Hoverchairs/ Ethereal denizens/ Terminus/ PP Messiah/ The Day It Rained Frogs.

"The big bash at Bentley's

SCUNTHORPE'S rock and pop corps are united in the cause to raise money for the burns unit at Pinderfields Hospital, Wakefield.
For the biggest free festival the town has ever seen is set to go ahead at Bentleys in High Street east on Bank Holiday Monday August 28.
No less than ten local bands plu DJ Ginner have volunteered their services for the big bash, which starts at 11am and runs non-stop until closing time 11pm.
Bentleys car park and beer garden will be put to full use with a barbeque and children's play equipment brought in to keep young and old amused.
Manager Rick Earnshaw and his wife Sue have also arranged for a firm to erect scaffolding for the bands.
Scunthorpe's Tiger Lily Mind were the latest band to sign up for the big day.
They will join the Day It Rained Frogs, Hoverchairs, Nam'inau, Nerve Rack, Terminus, Incinerator, Declaration, P.P.Messiah and The Diseased on stage."

(I have lost where this cutting came from but, because of the errors, I am assuming it's the Evening Telegraph).

On 2nd December 1988 the band played their 28th gig at Bentleys. Reviewed in next weeks Target:

"What must surely be one of the highlights of the Bentley's year took place last weekend, when local rockers Terminus played a tight set which proved beyond all doubt what a fine outfit they really are.
A couple of new numbers went down well, along with all the old favourites, performed with considerable power and the kind of conviction we have come to expect from frontman mark Richardson.
The lads also managed a surprisingly good sound - something that has always presented a problem to bands appearing at the popular venue." 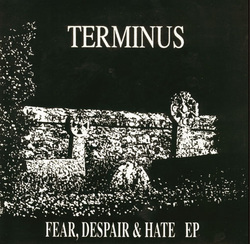 Dance With the Dead/ In Another Time/ Hunt the Hunt

The tracks for the second single/ EP were recorded at Beaumont Street Recording Studios, Huddersfield, on the 5th/ 6th April 1989. Produced by Pete Jones and Terminus. This also came with a double sided insert with the lyrics.
Thanks are due to Steve Midwinter and Sarah Richardson (no relation to Mark) for financing this project. The recording sessions for these songs went so smoothly that the studio was the
obvious choice for recording the first album. Little did I know this was the calm before the storm.

Quotes below from the 2nd single lyric sheet:

"Anarchism is the only philosophy which brings to man the consciousness of him self; which maintains that God, the State, and Society are non-existent, that their promises are null and void, since they can be fulfilled only through mans subordination."

"If we don't destroy Fascism, Fascism will destroy us."

"To listen to the 'Fear, despair & hate' EP by Terminus is to enter the darkest dreams, revisiting the starkest warnings offered by punk a decade ago. Back to basics, dole boy rock, unimpressed, primitive and powerful."

Back to basics dole boy rock? They know me then...?

"Phew! What a bloody great title for a record, I just wish I'd fuckin thought of it! This is rockin' ass bootin' punk rock vomiting into a bucket full of melody! Three songs of varying speed but all of excellent quality! Lyrics are intelligent and by bloody crikey if this isn't an all round heavin' good disk."

"I thought Terminus... was going to be some dismal Goth bilge, going by the cover, but I was pretty impressed, I must say! Side one's got undeniably gothy overtones, but there's no trace of the standard 'thick' bassline, and it is, in fact, a pretty powerful, fresh sound."