TERMINUS: WHAT KIND OF WORLD? Third 7"

The third single was a different kettle of fish and, apart from one of Steve's drums vanishing in the mix - which nobody missed until we got the test pressing back, the band were pretty pleased with the resulting single and the package it came in. A track from these sessions was recorded for a Words of Warning compilation album and was a reply to a song by another band on the WOW label, "You're Dreaming" by the Cowboy Killers. The comp concerned being:

Recorded in October 1990 at Huddersfield during the "What Kind of World?" single session, as was a so far unreleased version of "Terror is the Best of Guards."

There is a CD version of Mind Pollution Volume Two which also has the Terminus track on it along with the Blaggers and a few of the other bands from volume One. 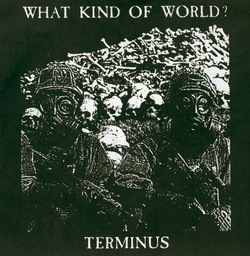 Came with a booklet sleeve in clear plastic bag.

Recorded at Beaumont Street Recording Studios, Huddersfield, in October 1990. Engineered by Chris Ellis, mixed by Steve Whitfield and Terminus. The track "Violent Resistance" was written on the way to the studio in the back of the van, and rehearsed in the studio before recording. Sound familiar? We also recorded a new version of "Terror Is The Best Of Guards" for Andy Turner to use on a comp, which was never used, and there was also an edited version of "Violent Resistance", without the slow start and end parts and which had slightly heavier guitars, if I remember correctly.

"You will be sitting on top of a pile of ruins even if you are victorious!" - "We have always lived in slums and holes in the wall. We will know how to accommodate our selves for a time. For, you must not forget that we can also build these palaces and cities, here in Spain and in America and everywhere. We, the workers. We can  build others to take their place, and better ones. We are not in the least afraid of ruins. We are going to inherit the earth. There is not the slightest doubt about that. The bourgeoisie might blast and ruin its own world before it leaves the stage of history. We carry a new world here, in our hearts, and that world is growing in this minute."

"Violence is justifiable only when it is necessary to defend oneself and others from violence. It is where necessity ceases that crime begins..."

"The slave is always in a state of legitimate defence and consequently, his violence against the Boss, against the oppressor, is always justifiable, and must be controlled only by such considerations as that the best and most economical use is being made of human effort and human sufferings."

"Terminus have released their What Kind of World 7" accompanied by an extravagant graphics and lyric booklet. They obviously have their roots in punk but never once do they resort to a blitzkrieg of sound, relying more on an intelligent use of texture and tempo to create an exhilarating diversion to what otherwise may Have  been a rather predictable format."

"When I wrote in my distribution list this sends shivers down my spine, someone told me it's not the first time I wrote that... well, that's possible but that doesn't make it less genuine; and it still does. Tuneful and moving HC-Punk. Lyrics about resistin'  the system and 'The Powers That Be.' Excellent."

"Their LP had some great songs which were ruined by an awful studio sound, but no mistakes here. Top notch production, it equals their 2nd EP, good anthemic hardcore, heavy pounding tuneful stuff. The B side was very disappointing I thought, I thought Terminus would know better than playing music (if you can call metal/HC music) that should have died years ago, but worth getting just for the A side."

"The third 7" from one of the most outstanding punk bands to rise from the ashes of the 80s/90s. Waving the black flag of anarchic protest. Mark & the TERMINUS brigade blast out an exhilarating & unique blend of CONFLICT, HAWKWIND, THE MOB and BAD RELIGION. Totally classic stuff from a much underrated ensemble. Comes in a booklet sleeve."

"This was something I had been looking forward to for a long time, being a big fan of their previous releases (particularly the two EP's). As usual, mark turns up with the goods again on vocals and guitars and some spot-on lyrics. There have been a couple of line up changes since the 'Going Nowhere Fast' album, these notably being the departure of Rocky (Chris Dale and Mark now do all the lead and rhythm guitars) and the addition of Steve C. on drums (in place of Mick Hare) who seems to be fitting in very well. In typical TERMINUS style, it's totally 'singalongable' stuff, even though I haven't got any lyrics 'cos I've got the advance recordings on tape (but no doubt you'll get the lyrics on the vinyl version). The flipside is another classic, 'Violent Resistance (or passive acceptance)', so what more is their to say except buy it! By the way, for anyone who enjoyed the acoustic title track on the LP, I've just got five acoustic tracks which will be released on tape LP by a London label (not WOW) which I can highly recommend!"


"Terminus are THE punk band on the planet at this present time and if you haven't heard them yet (why not?) then this is the perfect place to start. Both tracks, the title track and 'Violent Resistance', are simply the best so there! If you have the smallest grain of sense then you'll try this band out, they have the lot, songs and great lyrics, so get with it!.. 10/10.."

"The heat of youth soon chilled to the bone
Our poisoned minds burnt a cynical hue
Don't think don't talk and don't stand out of line.
The cards are dealt and don't you know your place
in this slaves hierarchy, this paradise of fools?"

WHAT KIND OF WORLD?
Richardson © 1990
LIVE AT THE QUEENS HOTEL, SCUNTHORPE
Not certain exactly when the photo's below were taken at the moment, sometime in 1990 at a guess. Probably Steve's first gig with Terminus, which would be the gig with US band Inside Out.

27th April 1991: The QUEENS HOTEL, Scunthorpe.
With the ABS and the Shreddies.

"The Abs, Terminus, The Shreddies - The Queen: I don't know where Dawn and Col keep pulling these bands from but they're so successful that if they ever give you a tip for the races - back it!...
Then came Terminus with the black clad Mark Richardson on guitar. He really is  quite a talented musician but does he really like anyone or anything? The set is so anarchistic and anti-everything it's amazing half the front row haven't topped themselves halfway through the night due to severe depression."

Do I like anyone or anything? Of course I do! But I used to get severe depression reading Chaz's column. Here's another review of the same gig:

"Terminus. One of Scunthorpe's most popular outfits. I honestly feel they should be topping bills, alas they are quite content in their home town. With Col Spence's thunderous bass lines and the masterly Chris Dale on guitar they are, at times, totally awesome musically. This leaves Mark to grind out deathly vocals at very aggressive rate."

Col left the band later in the year to be replaced by a mate of Chris and Steve's, Namely one Paddy Niland, who, having paid his dues in a number of local bands, killed his musical career stone dead by joining Terminus. Well, we all make mistakes, unfortunately some are fatal, terminal, even!
The first recordings with Paddy were for an acoustic tape called "Hands up for an early Grave", on which "The Wheel Turns" made its first appearance.
"The wheel turns... lays bare the  lies by which you've lived your worthless lives.
Stripped clean of all pretence, soon see how small and shallow you are!
The possessions you have allowed to weigh you down
will strangle you all... in the end.
Your scheming poisoned minds will not save you come the time
you are betrayed by your own vanity, as the wheel turns..."

Track Listing: The Wheel Turns (Richardson/ Dale)/ It Must Be True (Barnes/ Richardson)/ Born Again Hypocrite/ No Choice At All (Richardson/ Spence)/ The Price You Pay/ The Old Revolution (L. Cohen)/ To Live Here Once/ Commercial Reality/ No Love Like Remorse/ No Time This Time.

Originally to be released by a new tape label in London, the tape and cover were all sent off, never to be heard of again. Some people believe this to be one of the few fortunate occurrences in the torrid and disaster strewn history of Terminus.

There is, however, now a review of this unreleased tape, suitably enough on a blog dedicated to obscure music, called '1000 Flights':

'Terminus was an English band active from mid 80s to mid 90s .They released few 7inches and 2 LP's on Words of Warnings Records and TPPL Recs. On 2003 a retro compilation came out as cd with the best of their songs. This tape is totally diy, recorded live in their practise room with a 4 tracks recorder. Their music is a clever form of classic melodic HC punk with political lyrics, this tape is instead acoustic and somehow reminds me some of classic English folk and some apocalyptic folk from the northern countries. Yet it`s not listed on discogs and I never seen it on the net. I reckon there are not so many copies of it around and it`s for me a little pearl of the underground from the 90s.

You can down load a version from there - I cannot believe the singing is so deep!

Cover of a promo tape designed to be sent out to venues in order to procure more gigs! Some hope!