A BRIEF HISTORY OF TERMINUS

For those of you who don't already know (and that will be most of you I would think), TERMINUS are/ were a long serving 'punk-rock' band from the Steel Town of Scunthorpe in North Lincolnshire and have been described
in the local press as anything from 'local rockers', 'indie-speed-doomsters' to (with tongue stuck firmly in cheek) a 'psychedelic biker band'! None of which fits with singer Mark Richardson's description of the band as "Punk Rock, not punk-rock."

Elsewhere, in fanzine reviews of gigs and records, comparisons have been drawn between such diverse bands as the Damned, Dead Kennedy's, Conflict, Naked Raygun, Bad Religion, "Motorhead meets the Mob", and "a cross between Hawkwind and the Subhumans." The vocals to such unlikely folk as Jake Thackary, Billy Bragg and Oi Polloi (in the same German review!), Dave Vanian and Animal (from Anti Nowhere League and again both in the same review) and even Richard Butler and Bauhaus! Needless to say the band themselves consider all such comparisons dubious and the possible result of alcohol abuse. More likely is the simple fact that, although charges of inconsistency and idleness would certainly stick, they could never be accused of being as musically one dimensional as many of their contemporaries.
What follows is a brief history of the band compiled by longest serving member and founder of the band, Mark, for the information of those who have and still show an interest in the bands past and, who knows, maybe present activities.

The above was the original introduction for the Terminus web site, kindly created for the band by our friend, and a good friend of many others, John Fleming, and I have kept it in memory of John, who has sadly died, and not forgetting Robbie, his three legged dog! I have obviously added and revised where necessary, and am in the process of updating low res images from the original site, and adding more photo's and text, etc. It is also not-so-brief, either when it was originally done, or now!
All photo's/ graphics/ content © their respective creators/ owners. If anyone uses any content from this site it would be nice to be asked and credited.

TOO MUCH TOO LATE!
2-Tone Compilation album released 1st March 2017 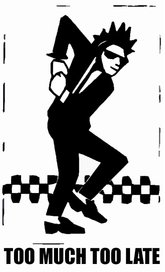 TOO MUCH TOO LATE: On March 1st, the "Too Much Too Late" 2-Tone tribute compilation album finally arrived, featuring various punk bands from back in the 1990's when the project was first conceived by the inimitable Chris from The Bus Station Loonies/ CDS, and very worthwhile it is too, even if I do say so myself!

The release is available from the Bus Station Loonies Bandcamp site as a Digital Album: Includes unlimited streaming via the free Bandcamp app, plus high-quality download in MP3, FLAC and more, and can be bought and downloaded for £7.00, and is still a benefit for 'Rape Crisis'. Track listing is:

"Originally intended for release in 1995 on Ruptured Ambitions, as a sequel to the Crass covers album and prior to the release of the 'Angry Songs and Bitter Words' compilation. As with the other two albums, this Two-Tone covers compilation is to be sold to help raise funds for Rape Crisis in the UK." 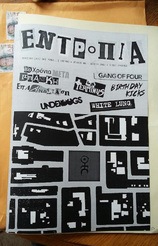 A new interview with Terminus (or rather just Mark) features in the new issue of Greek magazine “Entropia” . The new issue was launched at the Athens Zine Fest on 12th May 2016. We last featured in a Greek 'zine when we were interviewed for 'Stress' fanzine way back in 1989.

UPDATE  MAY 2015: TERMINUS: Dance With the Dead' Shirts Now Available!

UPDATE DECEMBER 2014: BACK AMONG THE BLIND

The Terminus T-Shirts are now available from the Annihilation Age Product's page.

Featuring the 'classic' logo used on the 'What Kind of World?' back sleeve and the 2nd album. These are printed white on black Gildan T-Shirts and are available in M, L, XL, and are priced at £9.99 plus £1.50 P&P. These are available from the AAA web store and also now on e-bay, they are also available directly from myself, Mark Richardson, should you live near 'sunny Scunny' and wish to pick one up.

2014: Thanks to Aston at Boss Tuneage Records, a CD of the bands singles and compilation LP appearances, 'Graveyard Of Dreams' and also the first Terminus album, 'Going Nowhere Fast' have both been recently issued on CD. Both available from either Boss Tuneage Records or the Annihilation Age Art web site, which features artwork created by Mark Richardson.